By Ciara Farmer For Mailonline

Last month, Kelly Rowland has revealed she is pregnant with her second child.

And the Destiny’s Child star, 39, certainly seems to be taking to things swimmingly as she was seen out showcasing her bump on Monday. 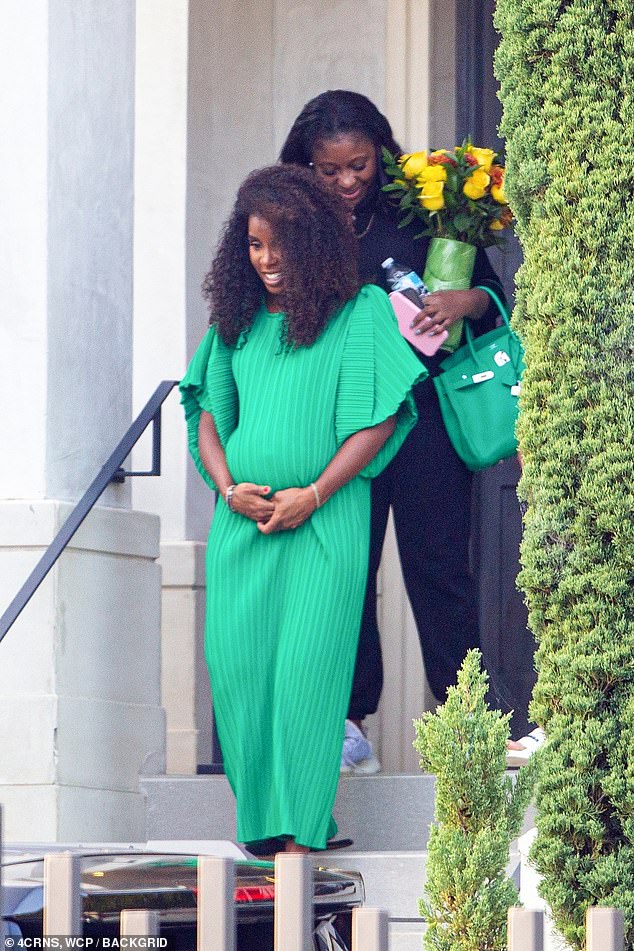 Green in bloom! Last month, Kelly Rowland has revealed she is pregnant with her second child and she certainly seems to be taking to things swimmingly as she was seen out showcasing her bump on Monday

Kelly looked radiant in the green dress which made the most of her changing frame thanks to the clinging middle section.

She wore her hair in a voluminous style as she emerged with an aide in her wake, who was holding a perfectly matching Birkin bag.

Kelly debuted her bump in a stunning shoot for Women’s Health and in an accompanying interview, she said: We had been talking about it loosely, and then COVID happened. And we were just like, “Let’s see what happens”…

‘I was thinking, My fans are gonna be so disappointed. They wanted an album, but they got a baby! And I was like, “I have to figure this out so they get both”.’ 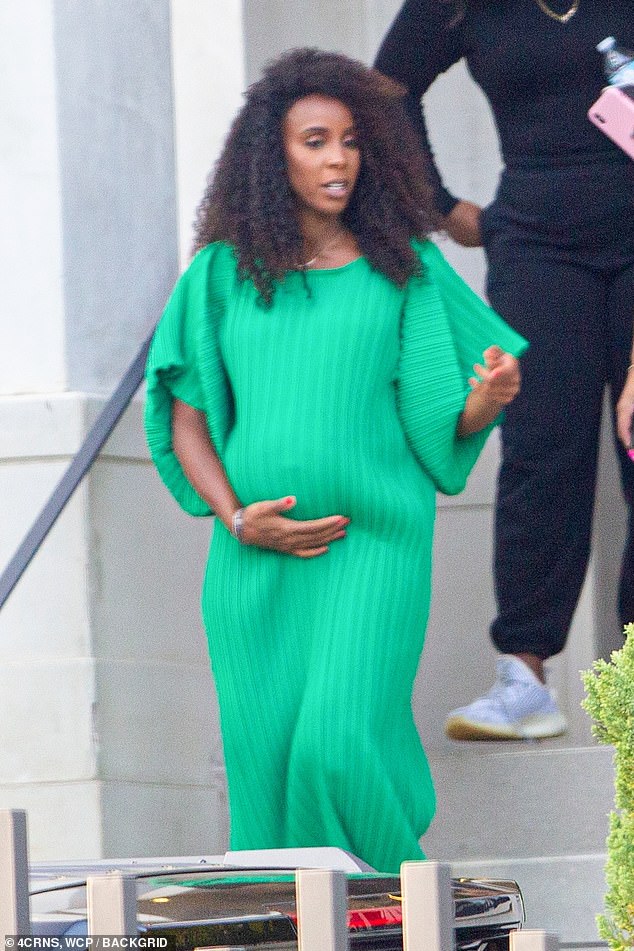 Kelly said she fell pregnant quickly and that their baby is due later in the year.

The superstar told the publication she had been nervous to share the news when country is facing the coronavirus pandemic and a ‘national reckoning on race’.

She said: ‘You still want to remind people that life is important. Being able to have a child. I’m knocking at 40’s door in February. Taking care of myself means a lot.’ 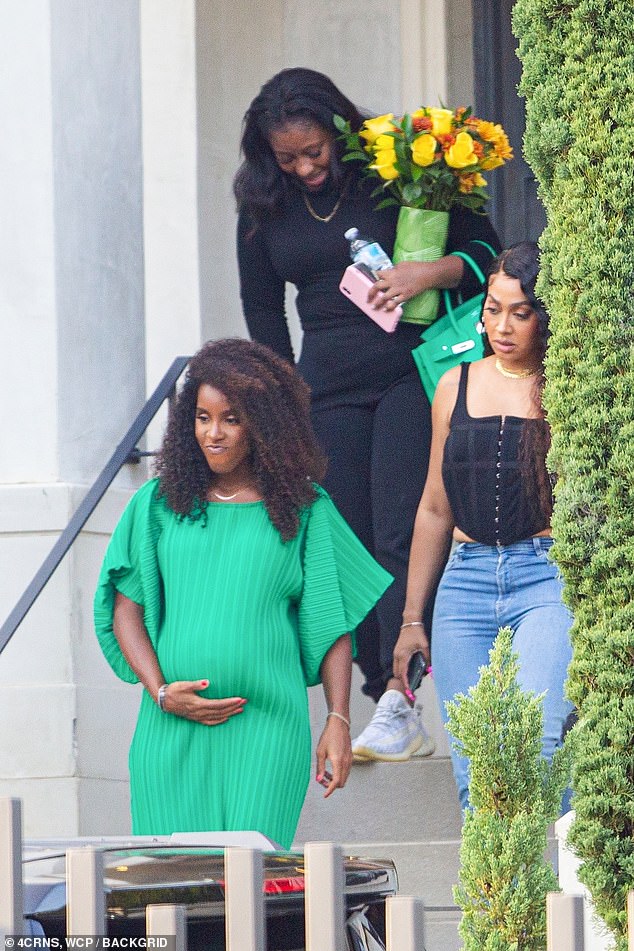 Radiant: Kelly looked radiant in the green dress which made the most of her changing frame thanks to the clinging middle section

Kelly also discussed the snacks she craves mid-way through her 90-minute exercise sessions, saying: ‘I am obsessed with sandwiches. A turkey sandwich with mustard and rye and sprouts and onion and sometimes a little avocado…

‘I don’t really count calories. Trust me, there are some days when it’s hard to look at seeds and nuts and fruit when everybody’s got french fries and burgers and Roscoe’s chicken and waffles at midnight.’

During the interview, Kelly also discussed grieving over the death of George Floyd and Breonna Taylor.

She said: ‘I’d just put Titan to bed. I got into the shower, and I had this real hard, ugly, deep cry. Because I promised to protect my kid. That was the main thing I was thinking about: protecting this little innocence.’ 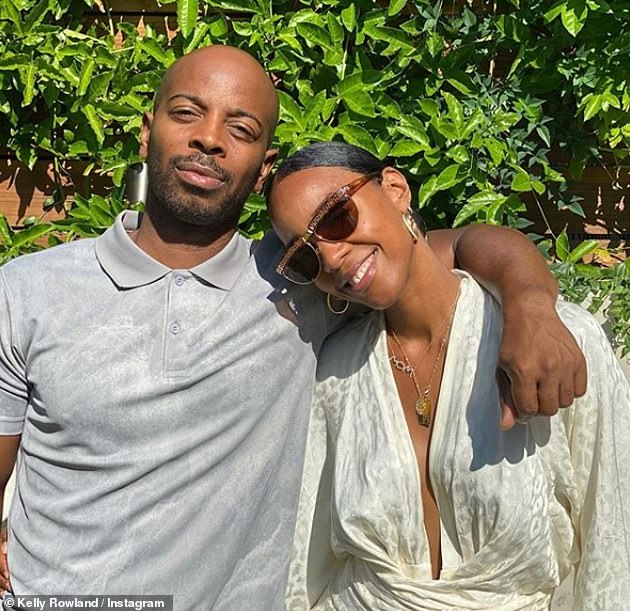 The global icon said she has been using music to reflect on poignant personal experiences – including a recent reunion with her biological father she hadn’t seen in 30 years.

She said: ‘I’m learning so much about myself, and the things that I missed. You say, “I’m fine, I’m fine”—and yeah, I’m fine—but there are things I would have liked to have experienced from a father. I like to touch on everything…

‘I want it to feel very organic, coming from me.’ 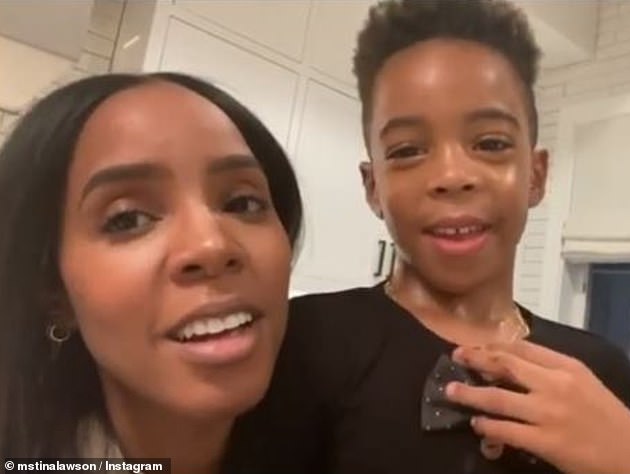 Their love: Kelly is delighted to add to her brood

Need Motivation to Exercise? Olfaction Is a Primal Motivator

7 Amazing Vegan Foods to Eat to Lose Weight, According to RDs